TORSA’s Collision Avoidance System for Haul Trucks, Auxiliary and Light Vehicles analyzes interactions between vehicles and people to avoid collisions and accidents in mining operations. The system informs the machinery operator about the type, position and distance of the different vehicles, obstacles and people around.

The high-precision anti-collision system for trucks and auxiliary vehicles developed by TORSA includes LIDAR 3D technology, which is able to analyse its environment with a very high level of precision and definition. Thanks to the fusion of technologies and the precision of analysis of the environmental analysis, the system adapts its security levels according to the situation in which it finds itself (hauling, loading, positive slope, high speed, etc.). The system is designed to protect the vehicle operator at all times, proactively and predictively assessing and alerting potential risk situations.

This system is the only one on the market that detects obstacles without the need for them to be metallic or have an identifier, thanks to LIDAR technology, the system is capable of detecting rocks, mining fronts, berms or any obstacle that may be considered a risk. 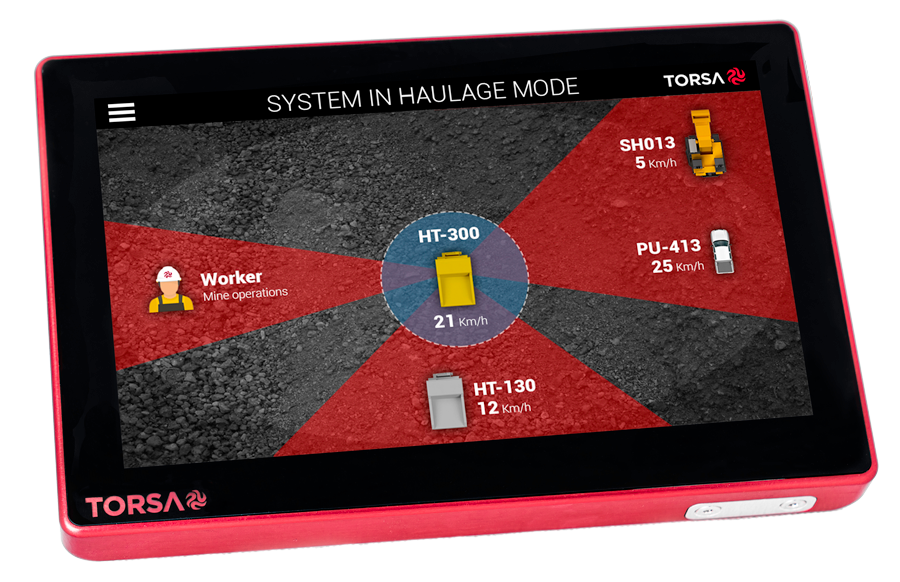 The collision avoidance system generates different reports aimed at covering the needs of the different departments of the mining operation. The reports can be customized by the client to obtain daily the necessary information in each case. Through these reports, both operational and management personnel can obtain the most relevant data for the evaluation of internally established KPIs. For example, a list of vehicles that have generated risk situations or have not been positioned correctly when loaded, permitting the identification of those operators which are more likely to require retraining.

Like all TORSA solutions, the collision avoidance system for trucks and light vehicles is integrated into the TORSA Cloud environment, thus ensuring the correct interaction, operation and technical information management for all our clients.

TORSA collaborates actively with the International Council on Mining & Metals (ICMM) where the company is involved in the Innovation for Cleaner Safer Vehicles (ICSV) program, which brings together 27 of the world’s leading mining companies and technologies suppliers to collaborate in a non-competitive space in order to accelerate the development of a new generation of mining vehicles.

Our system is designed to perform at Control Levels 7, 8 and 9 according to the safety requirements based on the ICSV program by ICMM following the EMESRT (The Earth Moving Equipment Safety Round Table) where TORSA also participates defining the new ISO 21815 (info). 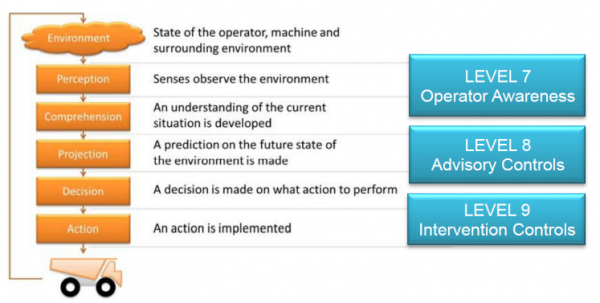 Unlike other systems on the market, TORSA’s CAS performs with high detection precision (centimeters) thanks to its LIDAR technology and is also capable of alerting to the presence of the mining front, berm or large rocks which could be also a potential risk for the equipment.

TORSA has designed a predictive algorithm that is capable of predicting risk based on the analysis of different parameters obtained through its hardware.

Example: When facing a lanes crossing, thanks to the high precision in positioning (GPS RTK) and detection (LIDAR 3D), TORSA’s CAS traces a virtual “detection tunnel” in front of the truck to act accordingly or intervene on the equipment base on the detection, speed, slope, etc. parameters.

In this way, the system relies on different technologies to ensure an absence of false positives of any kind at all times.

As mentioned above, TORSA’s Collision Avoidance System has a predictive algorithm capable of predicting risk in advance based on the different parameters obtained through the hardware installed in the equipment.

Scenario: Machine overpassing a speed limit while travelling downhill on ramps or any other place of the site where a speed monitoring is needed. – PUE 6 – OVERSPEED (O2)

Obtaining parameters like the heading, speed, inclination, GPS coordinates, cloud of detection point from its LIDAR, etc. the system is able to alert visual and acoustically to the operators in risk and it can also intervene on the control of the equipment reducing the speed to avoid a collision.

In the situation described above, the technologies and parameters that the system has, could be integrated into a geofencing system (associating areas of the mine with speed limits) implemented in the system’s server to identify if a vehicle is in a restricted zone or with a speed limit, being able to act on the machinery in the same way.

1
High precision detection and adjustable range according to needs
2
Generation of customized reports
3
Remote real-time monitoring of systems in operation
4
Reduced number of elements to install and quick installation
5
Non-dependent operation of a single technology
6
Assessment tool for mine training area
7
Continuous internal recording and storage of data collected and analyzed by the system
8
TORSA Cloud web interface allowing efficient and simple information management
9
Performs at Control Levels 7, 8 and 9 according to the safety requirements based on the ICSV program by ICMM following the EMESRT
For more information fill out the following form
This website uses cookies. If you continue browsing, you are accepting it.
Cookie SettingsAccept
Cookies and privacy policy